Unibet might be Sweden's premier iGaming platform, but it’s undoubtedly the darling of Europe's sports betting scene. Established in 1997 and now serving more than 15 million customers in over 100 countries. Plus, they have a fantastic £30 Free Bet to get you started.

Australia will aim to take a 3-0 lead in the Ashes series when they host Joe Root’s beleaguered troops at The Waca in Perth this week. They have reigned supreme so far, winning both tests comfortably, and they are favourites to pile more misery on a lacklustre England team. If they do so they will reclaim the urn with two tests to spare and will be on course for another whitewash. But it will not be easy as England can call upon the talents of several world-class players, and Steve Smith and co will have to be at the top of their game once more.

Over at https://www.oddschecker.com/au/cricket the bookmakers have Australia as the $1.57 favourite to win the third test, while England are all the way out at $4.70. That is the shortest price yet on Australia winning a test during this series and is a reflection of their dominance up until now.

No England player has been up to scratch on a consistent basis, while very few Australian players have underperformed. The hosts have drawn some criticism for their sledging tactics, but they have clearly been effective. Australia have once again got under England’s skin and won the psychological battle. 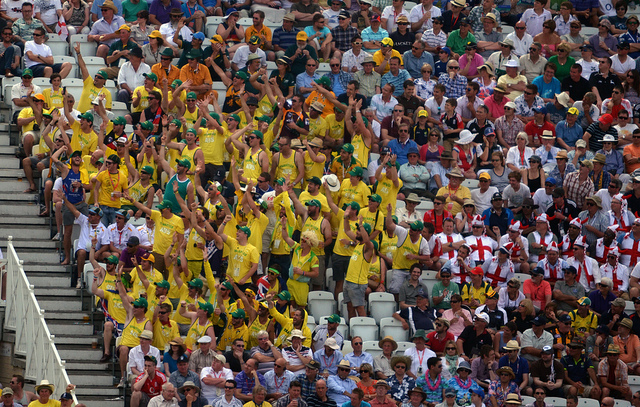 And once again the English batsmen just cannot seem to live with the pace, aggression and all-round ferocity of the Australian attack. Mitchell Starc has cut through England’s weak tail with gleeful aplomb. He ended the second innings in Adelaide 5-88 and is a constant thorn in the visitors’ side. Pat Cummins takes crucial wickets and is also handy with the bat, so he is en route to cult hero status.

Nathan Lyon promised to end England careers before the series and has delivered on that fighting talk with some exceptional performances. Smith has used him as a devastating weapon to break up partnerships and Lyon has become a real leader in this team. Alastair Cook must be sick of the sight of him, while Lyon’s diving catch to remove Moeen Ali will live long in the memory.

England’s biggest names in the batting department have underwhelmed, regularly getting bowled for pitiful scores. James Vince rescued England in the first innings at The Gabba and has since been woeful. Cook must want the ground to open up and swallow him whole. Root, Dawid Malan and Mark Stoneman have blown hot and cold. Johnny Bairstow has failed to deliver on his promise and has been made into a figure of mockery by brutal Australian sledging. Contrast them to Smith, who batted with grim-faced determination at The Gabba and killed the match as a contest with a first innings score of 141 not out. He has not hit those heights since, but Australia have always managed to find more than enough runs, with David Warner, Shaun Marsh and Cameron Bancroft racking up plenty strong scores.

Smith has thus far won the captain’s battle against Root and Australia have never looked in serious trouble of losing a test. England badly miss all-rounder Ben Stokes, suspended while he is investigated for assault, and if he were to return to the fold it could liven things up. Without him, England have an elongated tail and they have struggled for runs, while his absence also places too much pressure on the ageing James Anderson and Stuart Broad. But even Stokes would struggle to revive this limp, jaded England team. They have shown flashes of brilliance, like bowling Australia out for just 138 in the second innings at the Adelaide Oval, with Anderson and Chris Woakes in inspired form, but those flashes have been few and far between.

The home side has won the Ashes on six of the last seven occasions and Australia look to be cruising towards victory in this series. England struggle in hostile surrounds and foreign conditions, and Root has a huge job on his hands if he is to instil confidence in his men.

They have sent a young and inexperienced side to Australia and they have been pitilessly exposed by Australia. In the words of England legend Geoffrey Boycott: “Let’s be brutally honest: for the all the upbeat talk from our players and the hopes and expectations from our supporters, Australia are better than us. The Ashes are gone. We are not coming back from 2-0 down. England will have a massive job avoiding a 5-0 thrashing.” Australia have them on the ropes, and they simply need to kill them off in Perth this week.

Can England Save Face in 4th Test Against India